Schools can safely reopen even if teachers are not vaccinated for the coronavirus, the director of the U.S. Centers for Disease Control and Prevention said Wednesday.

As some teachers’ unions in the U.S. balk at resuming in-person instruction before teachers are vaccinated, Dr. Rochelle Walensky said that “vaccination of teachers is not a prerequisite for safe reopening of schools.” Walensky cited CDC data showing that physical distancing and wearing a mask significantly reduce the spread of the virus in school settings.

The subject of safely reopening schools has been the subject of heated debate, not just in the U.S. but around the world. Walensky’s remarks come ahead of a planned announcement in Ontario about when students in regions that are still doing remote learning will be allowed to return to school.

U.S. President Joe Biden has pledged to ensure that nearly all K-8 schools will reopen for in-person instruction in the first 100 days of his administration.

Teachers are prioritized as “essential workers” under the CDC’s vaccination plans, though many have yet to receive doses as the country continues to face a supply shortage of the vaccines.

The update from officials leading the new administration’s COVID-19 response came after Biden panned a Republican alternative to his $1.9 trillion US COVID-19 rescue plan as insufficient. Senate Democrats pushed ahead, voting to launch a process that could approve Biden’s sweeping rescue package on their own if Republicans refuse to support it.

Biden and Treasury Secretary Janet Yellen joined the Democratic senators for a private virtual meeting on Tuesday, both declaring that the Republicans’ $618-billion proposed plan was too small. They urged swift action to stem the coronavirus pandemic and its economic fallout.

As the White House reached for a bipartisan bill, Democrats marshalled their slim Senate majority, voting 50-49 to start a lengthy process for approving Biden’s bill with or without Republican support. The goal is to have COVID-19 relief approved by March, when extra unemployment assistance and other pandemic aid expires.

“President Biden spoke about the need for Congress to respond boldly and quickly,” Senate Majority Leader Chuck Schumer said after the lunch meeting. “If we did a package that small, we’d be mired in the COVID crisis for years.”

The night before, Biden met with 10 Republican senators pitching their $618 billion alternative and let them know it was insufficient to meet the country’s needs. The president made it clear that he won’t delay aid in hopes of winning GOP support. While no compromise was reached during the late Monday session, White House talks with Republicans are privately underway.

The U.S. has seen more than 26.4 million cases of COVID-19 and has reported more than 447,000 deaths during the pandemic, according to a tracking tool maintained by Johns Hopkins University in Maryland.

The two parties are far apart, with the Republican group of 10 senators focused primarily on the health-care crisis and smaller $1,000 direct aid to Americans than the $1,400 payments Biden proposed, while the president is leading Democrats toward a more sweeping rescue plan to shore up households, local governments and a partly shuttered economy.

Winning the support of 10 Republicans would be significant, potentially giving Biden the votes needed in the 50-50 Senate to reach the 60-vote threshold typically required to advance legislation. Vice-President Kamala Harris is the tie-breaker. 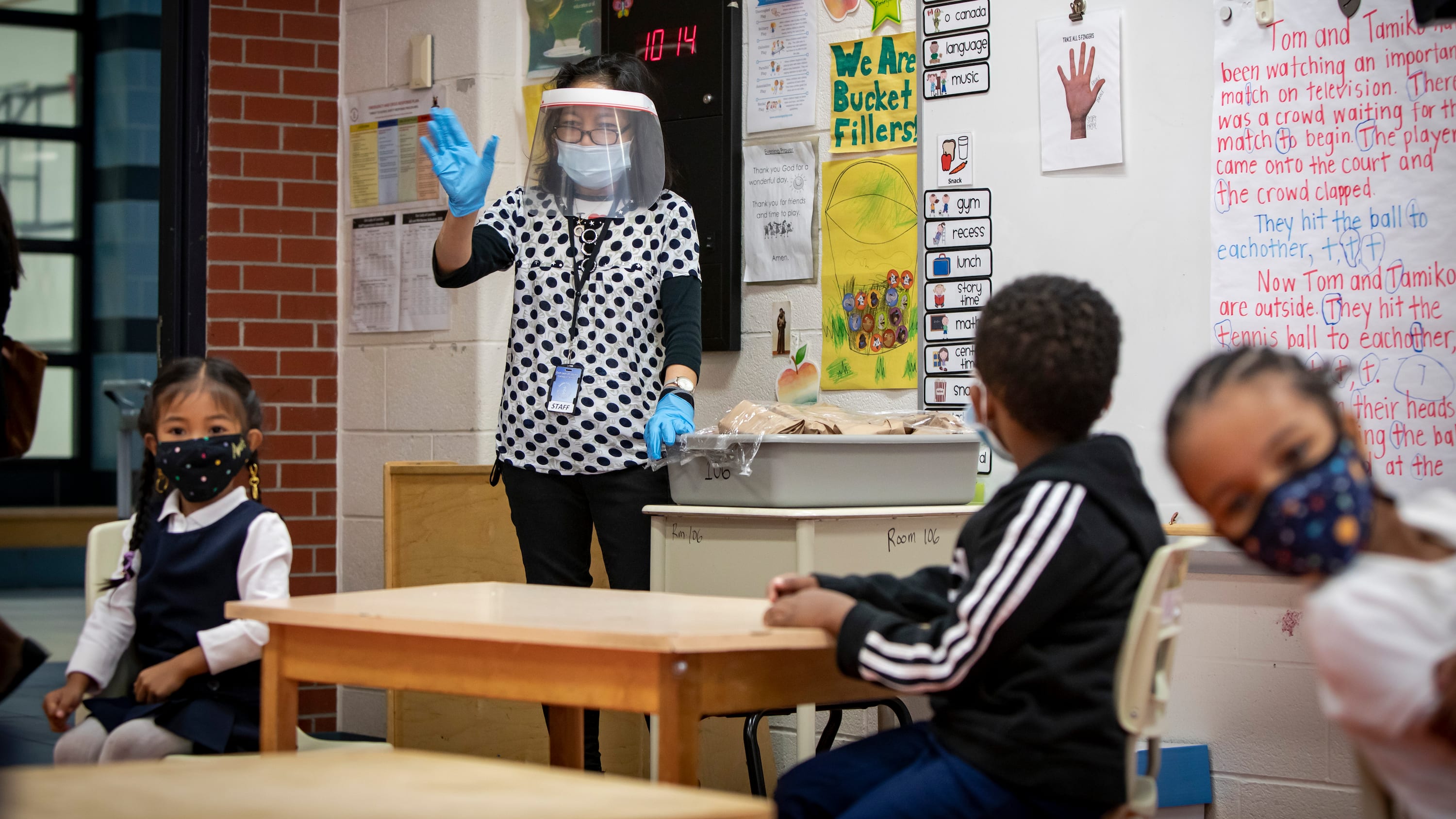 Kids in southern Ontario can return to school safely, despite higher community spread of COVID-19, says Dr. Peter Jüni, scientific director of the Ontario COVID-19 Science Advisory Table. But he says it will be a challenge that needs to be well-managed. 7:31

In Ontario, teachers, students and parents in several boards in the south of the province are waiting for word from the government on when students will be back in class. The decision will follow a recommendation from Dr. David Williams, the province’s chief medical officer of health.

Ontario reported 1,172 new cases of COVID-19 on Wednesday and 67 additional deaths. The update came a day after the province reported just 745 cases, though Health Minister Christine Elliott noted in a tweet on Tuesday that a data migration had impacted the daily count and the province anticipated “fluctuations in case numbers over the next few days.”

Hospitalizations in Ontario decreased to 1,066, according to a provincial dashboard updated Wednesday morning, with 336 COVID-19 patients in intensive care units.

In Quebec, health officials reported 1,053 new cases of COVID-19 and 37 additional deaths on Wednesday, a day after Premier François Legault announced that restrictions would be eased in some areas of the province. Hospitalizations in Quebec stood at 1,106, with 177 people in intensive care, according to a provincial database. 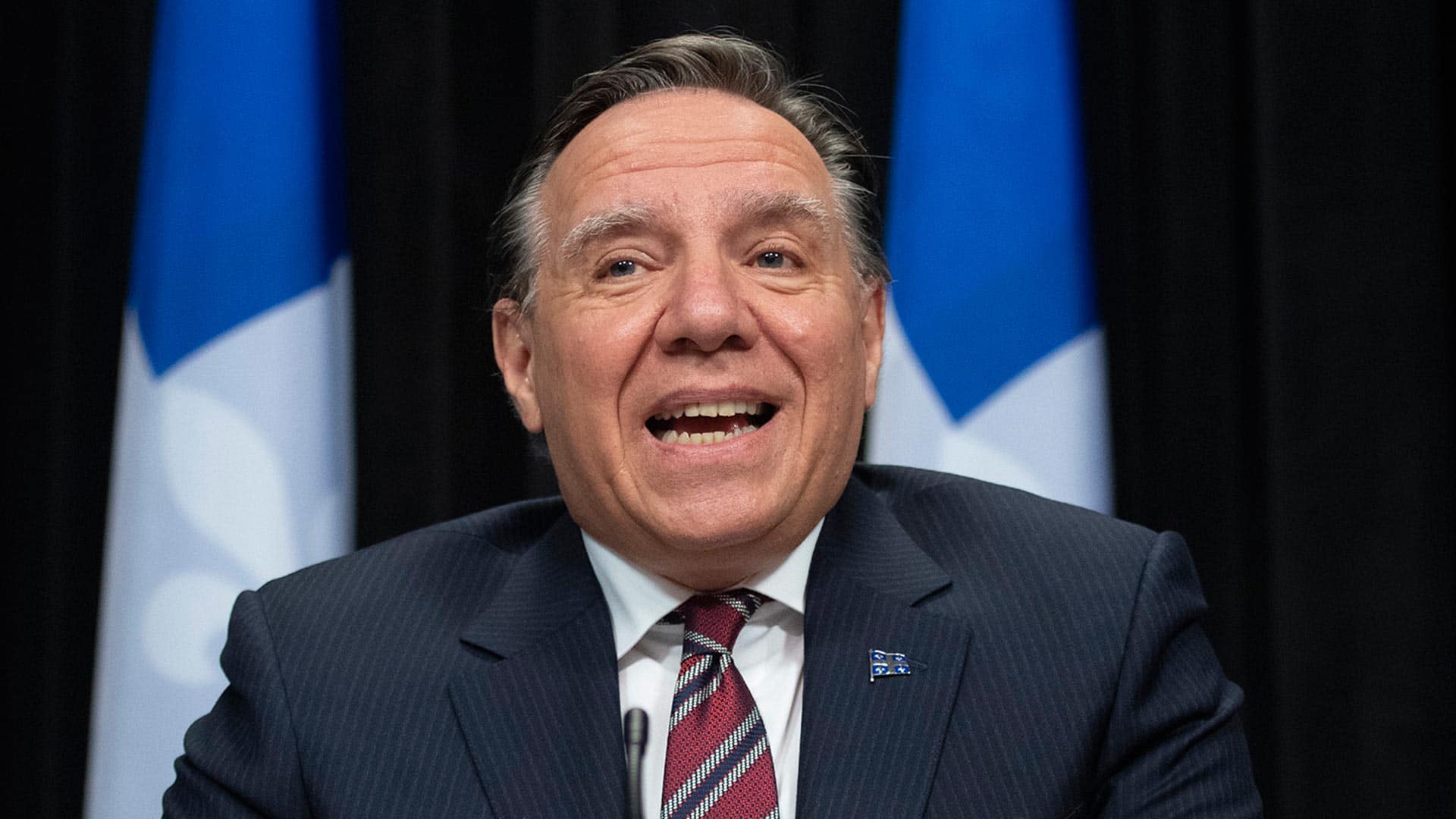 With COVID-19 case counts and hospitalizations declining, Quebec has announced cautious plans to loosen some provincial restrictions, but major centres like Montreal won’t see much change for now. 4:05

The Northwest Territories has declared a COVID-19 outbreak at Gahcho Kué Mine, 280 kilometres northeast of Yellowknife. There are now two confirmed cases of COVID-19 at the mine, both involving non-resident workers.

The territory’s chief public health officer, Dr. Kami Kandola, said both active cases are self-isolating at the mine and doing well. Kandola said an outbreak was declared because the second person acquired the virus at the mine.

Here’s a look at what is happening across the country:

-From The Canadian Press and CBC News, last updated at 2:15 p.m. ET

As of Wednesday afternoon, more than 104.8 million cases of COVID-19 had been reported worldwide, with more than 57.7 million of those listed as recovered or resolved, according to a tracking tool maintained by Johns Hopkins University. The global death toll stood at more than 2.2 million.

A United Nations-backed program to deploy COVID-19 vaccines to the neediest people worldwide has announced plans for an initial distribution of more than 100 million doses by the end of the first quarter.

The COVAX Facility says it aims for nearly 200 million doses by the end of June. Most of the vaccines in the first phase will be from AstraZeneca and the Serum Institute of India.

Another 1.2 million doses of a vaccine from Pfizer are expected to be shared by 18 countries in the first quarter.

The AstraZeneca vaccine rollout needs “emergency use” approval by the World Health Organization, which is expected in mid- to late February. The rollouts are contingent on regulatory approvals and the readiness of nations to receive the vaccines, which recently have been in short supply worldwide.

In the Asia-Pacific region, South Korean health officials said they have detected the first local transmissions of what are feared to be more contagious forms of the coronavirus first identified in Britain and South Africa.

Since October, health workers have found 39 cases of new variants of the virus that causes COVID-19, also including a form that was first identified in Brazil. The previous cases were found in people arriving from abroad.

WATCH | A WHO team visits China’s Wuhan Institute of Virology: 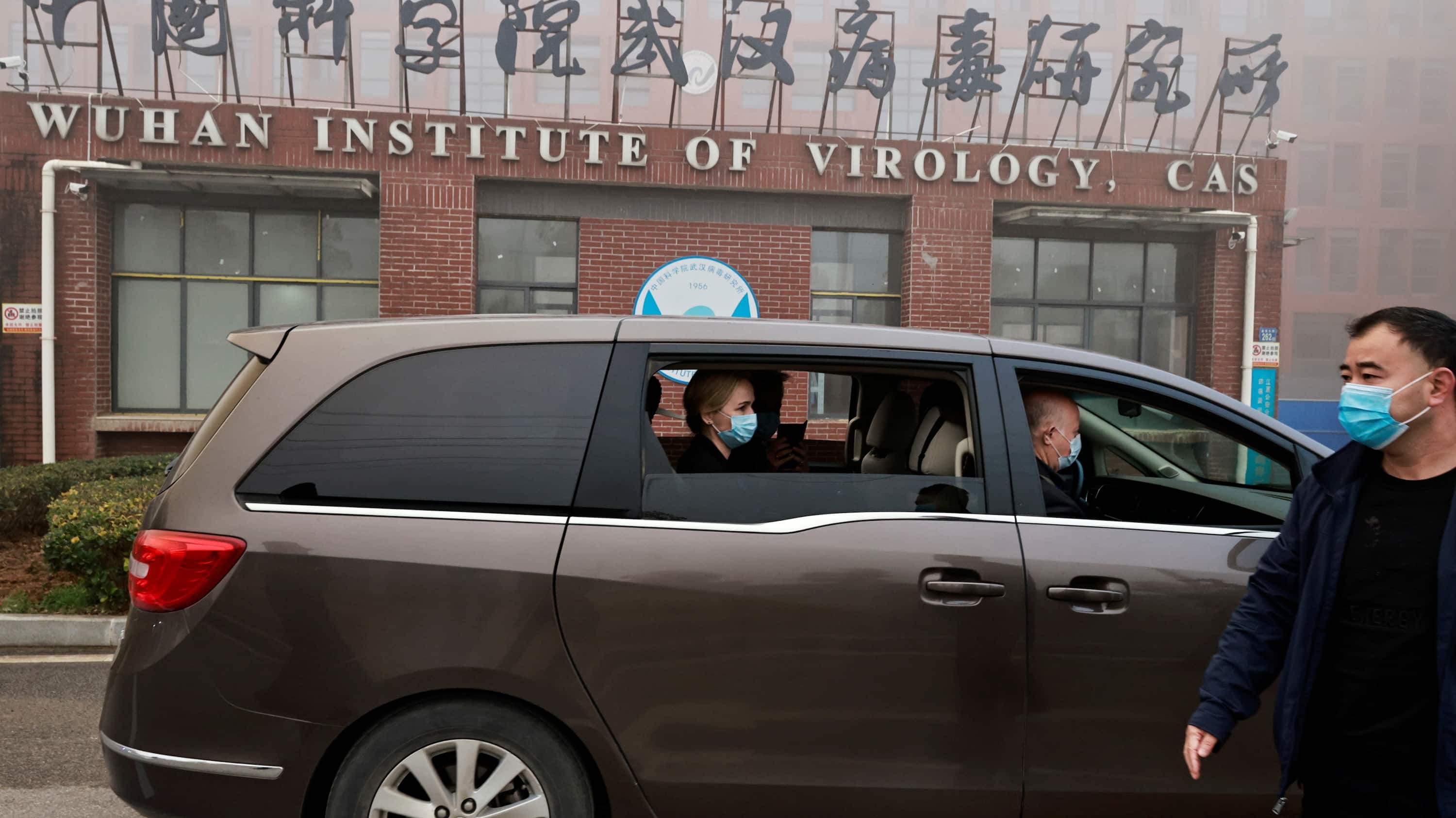 A special team from the World Health Organization has visited China’s Wuhan Institute of Virology, a key site in their search for the origins of the coronavirus. The team did not speak to waiting journalists after the visit. 1:25

In all five of the locally transmitted cases, the virus carriers had been infected from relatives who recently arrived from abroad, the agency said.

The KDCA said it is expanding contact tracing to determine whether the new variants could have circulated further. It also called for administrative officials to strengthen monitoring of passengers arriving from abroad so that they minimize their contact with other people during their two-week quarantine period, which in most cases can be done at home.

New Zealand’s medical regulator has approved its first coronavirus vaccine, and officials hope to begin giving shots to border workers by the end of March. Regulators granted provisional approval for the vaccine developed by Pfizer and BioNTech for people aged 16 and over.

New Zealand has no community transmission of the virus, and border workers are considered the most vulnerable to catching and spreading the disease because they deal with arriving travellers, some of whom are infected.

In Africa, South Africa will get two million doses of vaccines by March from the COVAX vaccine distribution scheme co-led by the World Health Organization.

In Europe, EU lawmakers questioned chief executive Ursula von der Leyen for hours on Tuesday over the slow rollout and shortage of COVID-19 vaccines as she took responsibility for an export control plan that angered Britain and Ireland.

A German military medical team is heading to Portugal to help that country deal with a spike in coronavirus cases.

The team of 26 doctors and nurses was flying to Portugal on Wednesday from Wunstorf, in northern Germany. Dr. Ulrich Baumgaertner, head of the military’s medical service, said the team will help at a civilian hospital in Lisbon.

The Ukrainian government is ready to cancel a nationwide lockdown and allow health authorities to ease lockdown measures in regions where COVID-19 cases are lower, Prime Minister Denys Shmygal said on Wednesday. The decision may be made in the coming days, he told a televised cabinet meeting. 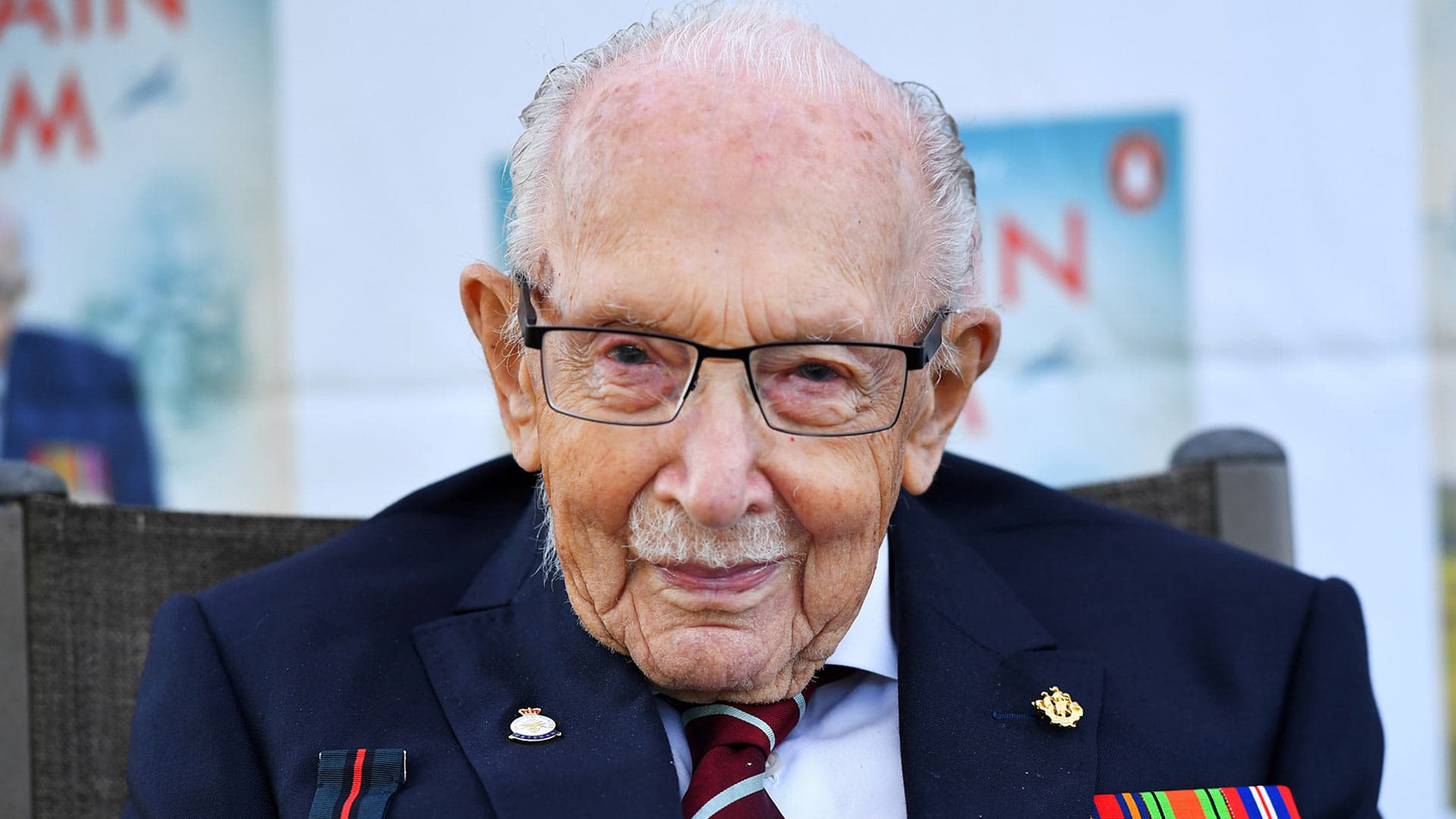 Capt. Sir Tom Moore, the 100-year-old Second World War veteran who raised millions to fight the pandemic by walking in his garden, died in hospital where he was being treated after a positive COVID-19 test. 2:02

In the Americas, Colombia reported the highest incidence of cases, followed by Brazil, where the city of Manaus is still seeing exponential increases in both cases and deaths, Pan American Health Organization director Dr. Carissa Etienne said. Three new variants have been detected in 20 countries of the Americas, though their frequency is still limited, she said in a briefing.

Colombia’s president, Iván Duque, also warned Wednesday that the government’s plan to vaccinate more than 35 million people this year could face delays. The country said last week it had secured 61.5 million vaccine doses from a raft of pharmaceutical companies and via the World Health Organization-backed COVAX scheme.

But in a mid-week media briefing, Duque recognized that the process could face delays, including potential export limits placed on vaccines by other countries and a low uptake of shots amid circulating disinformation.

“Are there risks [to the roll-out]? Yes, without doubt risks exist,” Duque said.

In the Middle East, Dubai will start vaccinating people with the Oxford-AstraZeneca vaccine, the state media office has said, after receiving its first shipment from India.

-From The Associated Press and Reuters, last updated at 3:15 p.m. ET

Have questions about this story? We’re answering as many as we can in the comments.

Best Buy has restocked both of Microsoft’s next-gen consoles the Xbox Series X and Series S. Like some other gaming gadgets...
Read more

But Corden made sure the prince wasn't missing home by serving up tea and crumpets as they took in the sights, including David...
Read more

Prince Harry said he didn't walk away from his royal duties, in an appearance on The Late, Late Show with James Corden that aired early Friday....
Read more
Previous articleSharp Drop in Heart Surgeries During the Pandemic
Next articleIsland President/CEO Darcus Beese to Exit

Best Buy has restocked both of Microsoft’s next-gen consoles the Xbox Series X and Series S. Like some other gaming gadgets...
Read more

But Corden made sure the prince wasn't missing home by serving up tea and crumpets as they took in the sights, including David...
Read more