Hinako Shibuno passed a big test Saturday in a classic U.S. Women’s Open that put a premium on par, keeping the lead with a 3-over 74 going into a final round at Champions Golf Club that figures to be the toughest of all.

Shibuno led by four shots when she made her lone birdie on the par-5 fifth hole, and then it was a matter of hanging on for dear life on a rain-softened course that made it tough to control shots with splatters of mud on the golf ball.

She bogeyed the final hole from a bunker and her lead was down to one shot over Amy Olson, who nearly holed out from the 17th fairway and shot a 71 that felt much lower.

While Shibuno got through her third round, it was a much challenging Saturday for Brooke Henderson. The Smiths Falls, Ont. native hit three bogeys and a double bogey to finish with a 6-over 77 in her third round. Henderson failed to improve from her 2-over 73 second round Friday.

Moriya Jutanugarn, playing in the same group as her two-time major champion sister, Ariya, was right in the mix until she bladed a bunker shot to the back of the 17th green and three-putted for a double bogey. She still managed a 72 and was three behind, among only four players who remained under par.

The other was Ji Yeong Kim2 of South Korea, who was on the opposite end of the Cypress Creek course. Kim2 made the cut with one shot to spare and shot a 67 — one of only two rounds under par — that moved her into a tie for third. Kim finished by chipping in for birdie on the par-5 ninth hole.

Shibuno was at 4-under 209 as she bids to become the first player since Se Ri Pak in 1998 to win majors for her first two LPGA Tour victories. Pak did it a few months apart in 1998. Shibuno won the Women’s British Open last year at Woburn, and declined to take up LPGA membership because she didn’t think she was ready.

Now her only way to join the LPGA is to win on Sunday, and it doesn’t figure to be easy. With rain in the forecast, the USGA has moved up starting times as early as possible, with the first group starting at 7:45 a.m. 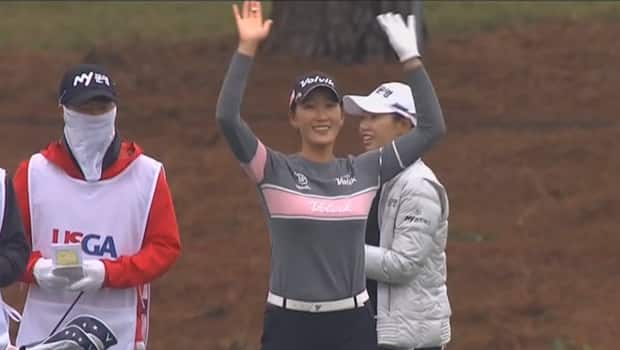 South Korea’s Chella Choi hit a hole-in-one Saturday during the third round of the Women’s US Open in Houston. 1:08

Eight players were separated by four shots going into the final round, a group that includes Lydia Ko (72) and Texas senior Kaitlyn Papp, who played in the final group with Shibuno and held her own until dropping two shots over the last three holes for a 74. They were at even-par 213, along with 19-year-old Yealimi Noh (72) and Megan Khang (74).

Jin Young Ko, the No. 1 player in the world and a two-time major champion, made 16 pars in her round of 71 and that was enough to at least give her a chance. She was at 1-over 214 with Women’s PGA champion Sei Young Kim (73).

All of them had to contend with a course that played 6,635 yards and felt even longer because of heavy rain Friday after the second round ended.

More than length was mud that gathered on the golf ball in the fairway. That creates problems for Champions because of its enormous greens.

Asked about the mud, Olson laughed and replied, “Which one? There were about 18 of them.”

“At one point I laughed and it was like, `Is it going to be in a divot or a mud ball?’ Because it was one or the other pretty much all day,” she said. “So I’m really hoping that we either do lift, clean and place or it’s so wet tomorrow that the water just pulls the mud off.”

She delivered her best shot on the 17th, hitting an 8-iron — the same club, the same type of shot for her hole-in-one in the opening round — that came inches away from going in. The tap-in birdie and a solid par on the last puts her in the last group as the 28-year-old from North Dakota tries to win for the first time.

Stacy Lewis, who grew up in the Houston area and is a member at Champions, saw her chances end on the back nine. She stayed in the game with an 80-foot birdie putt on No. 9 and a two-putt from even longer range on the next hole.

But she three-putted from 25 feet for bogey on the par-5 13th, and on the next hole, Lewis came up short and into the hazard, and then compounded the mistake with another three-putt for a triple bogey. Standing on the 15th tee, she bowed her head into the crook of her elbow for a minute until it was her time to hit, perhaps knowing her chances were over.

Lewis shot 77 and was eight shots behind in a tie for 25th.

Honor has announced the new V40 5G flagship phone, its first since Huawei sold the company off to a Shenzhen-based consortium...
Read more

Hip-hop stars Wyclef Jean and Eve and actors Anthony Anderson and Marlon Wayans are among past hosts of the event, now in its...
Read more
Previous articleGoogle adds more AR animals to mobile Search and most of them are pretty cute
Next articleVirgin Galactic’s SpaceShipTwo suffers apparent abort in 1st launch from Spaceport America

The Vancouver Whitecaps went international in the first round of Thursday's MLS SuperDraft, taking a Nigerian forward and Jamaican defender. The Whitecaps...
Read more

The Winnipeg Football Club is banking on the COVID-19 pandemic improving enough this spring to allow the team to play in front of thousands of fans...
Read more

Honor has announced the new V40 5G flagship phone, its first since Huawei sold the company off to a Shenzhen-based consortium...
Read more

Hip-hop stars Wyclef Jean and Eve and actors Anthony Anderson and Marlon Wayans are among past hosts of the event, now in its...
Read more